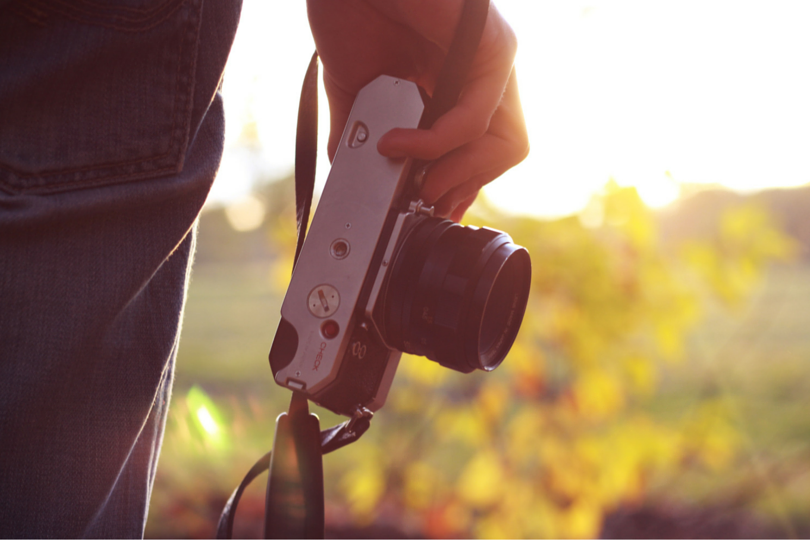 I’ve been a hobby photographer since 1968, and since then I’ve always owned a 35mm camera of some sort. In photography, focus is one of the more important elements for achieving good results. Focusing isolates your subject and brings it to the foreground. In a good photograph, the subject is in focus and the viewer’s eyes are drawn to that spot in the picture, seeing the statement the photographer is trying to make. In our Christian walk, we have to make sure we are focused on the right subject so that our life reflects the image of Christ that dwells in us. A camera records an image by the light reflected off the subject, back through the lens where it is captured on film or a digital sensor; it records the subject we focus on. Jesus stayed focused on his Heavenly Father so well that Colossians 1:15 says that “He is the image of the invisible God.”

The Importance of Lighting

For good focus to be achieved, you need good light. Modern cameras have auto-focus, but if there is insufficient light, the camera will not focus correctly. One of the ways the word “light” is used in scripture is as an idiom to represent the knowledge and wisdom from God.

Psalm 119:105 says “Your word is a lamp to my feet and a light for my path.” Jesus was a man who was well-versed in the Old Testament scriptures. When he was being tempted in the desert by the Devil, he countered each temptation with “it is written” (Matthew 4:1-11). Jesus hadn’t eaten for forty days during this account, and was tired and hungry. If anyone had an excuse to become unfocused, Jesus did. This is a great example of how using the light of God’s word allowed Jesus to stay focused and achieve victory over the temptations the Devil had set before him.

Hebrews 12:2 REV
…fixing our eyes on Jesus, the leader and finisher of our trust, who, because of the joy that was set before him, endured the cross, thinking nothing of the shame, and has sat down at the right hand of the throne of God.

What Do We Focus On?

With all the distractions in life, it’s easy to get focused on the wrong thing. Jesus Christ is the subject of God’s word from Genesis to Revelation, and that should be a clear message of “what” we need to focus on. Subsequently Christ, in his life and ministry, stayed focused on God’s will, which was to conquer sin and death and make life right again just as He intended it when He first created mankind in Eden. Jesus is our example of how to stay focused on the right thing, we can focus on him by studying his life as it is recorded in Scripture.

The “joy” that was set before Christ was a picture of a Kingdom here on earth that he would rule in peace and justice—a kingdom where there is plenty of food, safety, health, and ultimately, no more death. Because Christ was so focused on this picture, he was able to endure the torturous death of the cross along with the shame and pain that he suffered. God asks us to stay focused by “fixing our eyes on Jesus.” Christ is the epitome, or that perfect example, of a particular quality or type; he is the subject of our focus in our walk of trust.

The quality of light is also important. Photographers know about the “golden hours,” that time of day just after sunrise and just before sunset when the sun is low in the sky and the quality of light is at its best. They also use flashes and studio lights with their camera to eliminate harsh shadows and to illuminate the subject so that the image is the best representation of who or what that subject is. Sadly, much of Christianity today presents God in poor light—such as with the common saying that “all things happen for a reason.” When many Christians make that statement, what they mean is that “God is in control of everything that happens.” That presents God as a shadowy figure who is very arbitrary, who can bless us one minute and destroy us the next. That is not the God of Scripture.

1 John 1:5 says that “God is light, and in him is no darkness at all.” And 1 John 4:16 says that “God is love.” One of Satan’s strategies is to “shoot” God in poor light, as a shadowy figure who is untrustworthy. 2 Corinthians 11:14 says that “the Adversary disguises himself as an angel of light.” His purpose is to keep us from “shining forth the light of the Good News of the glory of Christ,” which represents the true image of God to the unsaved world.

2 Corinthians 4:4 REV
…in whom the god of this age (Satan) has blinded the minds of those who do not believe, to keep them from seeing and shining forth the light of the Good News of the glory of Christ, who is the image of God.)

The Depth of Field

Another element in photography is the f-stop. The “f” stands for focal ratio. This setting controls the pupil in the lens of a camera and determines how much is in focus in a picture. Portrait photographers are very aware of this setting because it controls what is called “depth of field.” If all the objects in a picture are in focus, this can make for a confusing picture. The subject can get lost in all the background details. Using a shallow depth of field blurs out the distracting details in the background and brings the true subject forward in a picture.

There is a great example in the Gospel of Luke 8:40-48 of Jesus doing this very thing. The fame of Jesus Christ had spread throughout Israel by this time. Many believed he was the promised Messiah and in this account, a crowd surrounded him and his disciples and were pressing in to see and touch him. At one point, Jesus said, “Someone touched me.” Peter turned to him and replied, “Thank you, Captain Obvious. We’re in the middle of a crowd. Of course someone touched you!” But Jesus was not distracted by the crowd. He focused in on the real subject: a woman who was suffering from menstrual issues and had been bleeding for twelve years. She had also spent all of her income on doctors, but they were unable to help her. This woman knew the Old Testament prophecies about the Messiah. She believed that if she touched the folds of his robe, she would be healed. In the middle of all this confusion, Jesus stopped and said, “Daughter, your trust has made you whole. Go in peace.” It’s easy to become unfocused by all the background distractions that life presents, but staying focused by zooming in on the real issues, just as Jesus did in this instance, will keep us centered in our walk of trust in God and His Son.

We all project an image. We do it with words and deeds in our interactions with others. For the most part that image depends on what we focus on. Mankind was created in the image of God, but we have the freedom of will to project that image or not. As His children, God asks us to put off the old sin nature and put on the new one that is created in us through the gift of holy spirit. That new nature bears the image of the One who created it in us.

Colossians 3:9-10
(9) Never lie to one another, since you have put off the old self with its practices
(10) and have put on the new self that is being renewed to a true knowledge that is in accord with the image of the one who created it.

Photography is a learned craft. It takes consideration of all the elements involved to produce a good image. With digital photography, an image is further developed with software in what is called “post processing.” With film, it takes time and skill to develop a quality image. It’s taken me years to hone my photography skills, but over time my ratio of good photos to bad ones has improved. This is also true when developing the image of God that we project. It’s something we have to practice every day, but by staying focused on our Lord Jesus Christ, that image should develop and become clearer as we progress in our walk of trust.

2 Corinthians 3:18
And we all, with unveiled faces reflecting as in a mirror the glory of the Lord, are being transformed into the same appearance, from glory into glory, even as from the Lord who is the Spirit.

The final glory we will be transformed into will occur when our Lord appears at the Rapture, and as 1 John 3:1 says, “Beloved, we are children of God now, and what we will be has not yet been revealed. We know that when it is revealed, we will be like him, because we will see him just as he is.” Our focus should not be limited to the Jesus of the Four Gospels; it should also include the risen Lord who is seated at the right hand of God, far above all might and dominion, and who some day in the future will transform us into that “same appearance.”

We will never perfect the image of Christ in us in this lifetime because of the sin nature we struggle against. But as we stay focused on the subject, who is Jesus Christ, and as we illuminate the “subject” with the true light of God’s word, and as we use the proper depth of field to eliminate distractions, we will reflect the glory of Christ who is the image of the true God.