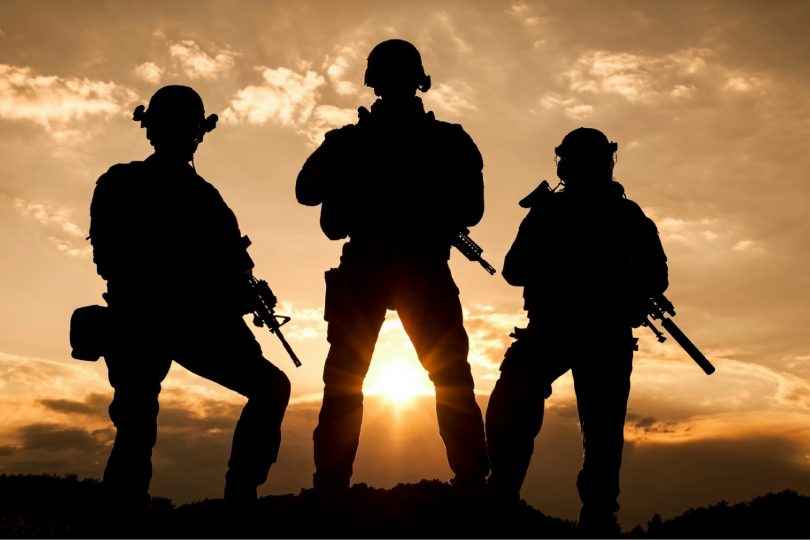 From this day to the ending of the world,
But we in it shall be remembered-
We few, we happy few, we band of brothers;
For he to-day that sheds his blood with me
Shall be my brother

We are at war.

Not a war of borders, of culture, of race or religion. We are standing in the midst of a spiritual battle that has been raging for untold millennia. Despite the endurance and scope of this war, a vast number of people are oblivious to the volleys being fired behind the veil, blissfully unaware of the cosmic duel between God and His enemy, the Devil, even as the fallout of that conflict manifests in the world around us: spiritual attacks, sickness, strife, even death.

Christians should be aware of this war. There are plenty of verses that tell of it— Ephesians 6:12-13, 2 Corinthians 10:3-4, 1 Peter 5:8, just to name a few. Yet it remains a subject not often spoken about, a collision of truth against an ideal often used to draw others to Christ. The Christian walk doesn’t seem as cheerfully appealing to many people when the truth of it is that the new Christian is stepping into a battle that was already raging around him, picking up the Armor of God (Eph. 6) to wage war against a vicious, ancient enemy.

The Art of War

The tactic of “defeat in detail”, more commonly referred to as “divide and conquer,” is well-known by most military strategists. The approach is simple: by fracturing the forces of a larger or otherwise superior army, the opposing army, whether smaller or in other ways inferior, stands a greater chance of success.

Unfortunately, this tactic has seen overwhelming success in Christianity. One needs only to look at the 40,000+ denominations in Christianity to see that we are, at least in some ways, divided. Now, that’s not to say that disagreement between viewpoints is unhealthy or unacceptable. No two people approach spiritual matters the same way; in fact, those of a single denomination are bound to hold differing opinions on certain matters even within the framework of their shared beliefs.

The trouble we find, then, lies not in the differences of opinion, but in the urge many feel to attack fellow members of the Body of Christ because of these differences. Whether it’s one’s stance on abortion, sexuality, tithing, baptism—and the list goes on—Christians have gained some renown for their inability to reconcile with their own brothers and sisters in the Faith over varying viewpoints. And this does play into the Devil’s strategy of “divide and conquer.”

The Target Of The Blood

When we as Christians truly begin to grasp the fact that we are at war, much of what seems to be a part of life, collisions of viewpoints, and irreconcilable differences is in fact revealed to be the Devil’s hand dancing the puppets from behind the scenes, moving his troops along the war map. The Bible makes it clear that the Devil is the “god of this world” (2 Cor. 4:4), and his many systems are in place to deceive and divide people, pushing them farther away from God’s ranks—where they could have become spiritually equipped to fight against the forces of evil unseen—and deeper into a darkness which only a holy light can rend.

This war that we are caught in the midst of does not end when we join God’s ranks. God equips us to fight in it; He doesn’t excuse us from it. We are called both to defend ourselves and those around us, as any soldier would in war. And those fellow Christians with whom we interact are fighting the same war. They are under spiritual attack, just as we are. Whether a Jehovah’s Witness, a Baptist, a Catholic, a Unitarian, each one is a soldier and each one is a threat to the Devil. This makes them a target; it also makes them a fellow soldier in the foxhole beside us, regardless of their denomination.

The Devil does not discriminate in his warfare. He doesn’t attack Unitarians in particular, or Catholics, or Presbyterians because a certain denomination believes they have “a greater scope of Truth.” As important as absolute truth is, it doesn’t delineate who will come under greater attack. It’s one’s identity as Christian, bought and paid for by the blood of Christ which was shed for all, that makes one a target of the Devil. And once that target is painted, all bets are off.

I recall hearing a quote some years ago by a soldier. In essence his statement was: “When I’m lying in that foxhole, I don’t care about the race, religion, gender, or sexual orientation of the soldier beside me. All I care about is that they can fire their gun.”

Obviously, this man’s viewpoint has not always been shared by soldiers throughout history. During the Revolutionary War, there were many who refused to fight alongside soldiers of different-colored skin. We today recognize this as a prejudiced opinion, a product of the times and the opinions of that day and age, and for the most part people today do not share that biased view. But Christians are often too quick to carry that same prejudice in a different light, refusing to meet with, pray with, or enter into spiritual warfare alongside those of a different denomination.

Imagine yourself lying in a foxhole, with shells and bullets spraying the air. Imagine yourself ordered out of that foxhole by the soldier you’re sheltering with, because there is something about you that he doesn’t like. You’re being thrust away from a place of defense, away from an ally who should be watching your back as you watch his. Your enemy is not in the foxhole; your enemy is outside of the hole. But your fellow soldier doesn’t seem to believe that. The differences between you become irreconcilable, and there is no longer a bond between you that either of you can depend on.

Now draw back the curtain. Our true Enemy, the Devil, tries to sow seeds of division just like that. See how, ever-so-subtly, what is often dismissed as merely separation over differing viewpoints has in many ways become a hard line in the dirt which Christians won’t even attempt to cross. Instead we stand on opposite sides of it, spewing hate and vitriol toward our brothers and sisters in Christ who hold differing opinions, while the Devil dusts off his hands and walks away.

His work here is done. We are fighting one another instead of fighting him.

The Bible tells us that God has equipped us to fight in a spiritual battle that rages around us daily. Prayer, walking by the spirit, and spreading of the Gospel are just a few of the measures we can take to advance the Kingdom, pushing back the frontier of the Devil’s devices. But when we’re fixated on seeing other Christians as the enemy, we aren’t focusing on our real enemy. We’re firing on our own ranks, determined to see our fellow Christ-followers as our opponents.

We have been given great weapons for this battle; but if we aim them at one another, they become useless at best. As soldiers, we can consider our denominations as various units, different military divisions all serving under a single banner: the banner of Jesus Christ and of God, the leaders in the war we fight against the rulers of darkness in spiritual realms.

When we unite, turning our weapons away from each other and onto our true enemies, we stand a far better chance of succeeding in this fight. When we don’t allow the enemy’s tactics of division to separate us, we put him on the run. Because a house divided against itself cannot stand (Mark 3:25), it is imperative that Christians find common ground and unity—not necessarily perfect doctrinal unity—in this battle. Make no mistake, the Devil knows that a divided House of God will crumble. Through pride, deception, anger, arguments and slander, he has brought down and scattered many of these houses.

It is up to each Christian to decide if their stance, their doctrine, their opinions will be a cause for disunity, or for unity. If they will share their foxhole in this spiritual battle with someone of differing beliefs, wearing the same badge of God’s Army on their heart—or if they will order them out again.

Christians are more than a family. More than a Body serving under the head, Jesus Christ. We are a human army waging war in a spiritual battle that is much bigger than we can ever comprehend. With revelation and wisdom, being guided by God’s spirit and the Scriptures, we’re more aware of this reality than our ancestors in the time of Abraham and Moses, King David and the prophets, ever were.

It’s up to us what we do with that knowledge. Do we fight against the flesh and blood of our fellow Christians? Or do we unite with our brothers in arms, turn together and face the forces of darkness in the spiritual realm? Do we allow our knowledge to puff us up and make us feel superior, or do we recognize whose flag we serve under, whose cause we carry, who has equipped us to do battle?

If we allow ourselves to be divided amongst ourselves, we will be conquered. That is why the Devil twists our differences of opinion, whispers into our ears that we can’t have peace with those who believe differently from us. But we have a great weapon in the presence of God’s holy spirit within us, fighting against our old man nature that perks up its ears at the Devil’s whispering and tries to say, “He’s right. I can’t agree with that person, they believe something I know isn’t true!” We must remember that we are part of One Body, that we are all one in Christ Jesus. One army fighting under one flag, brothers in arms who must stand together so that we do not fall.

No one denomination knows everything. Trust in the One who knows all, the One who is for us—for all of us, not any single group; the God who tells us that we are one, who trains our hands for battle and fingers for war, who has shown us that we are at war. Trust in the One who has promised us that, with His mighty help, we are more than conquerors, and that all who follow Him have been given victory through Jesus Christ our Lord.