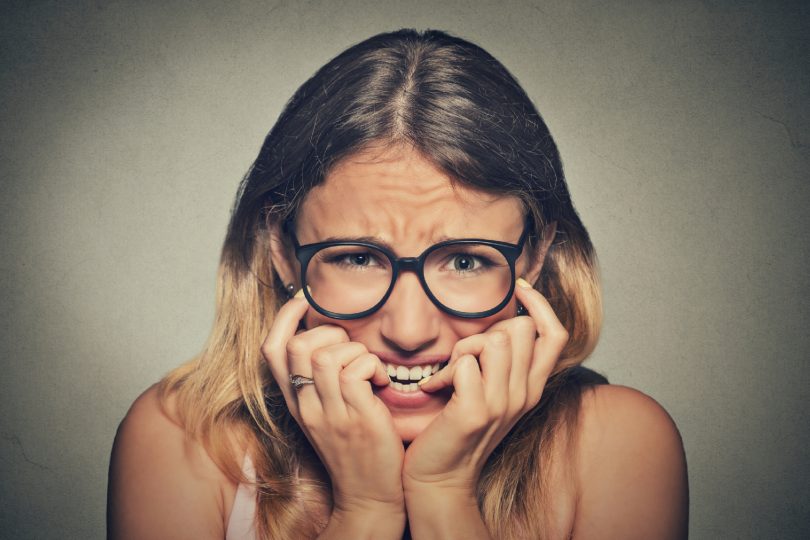 We all have them.

From simple uneasy rumblings to devastating phobias, we’ve all faced something in our lives that’s threatened to put us on the run. For my part, I’ve had two major fears my whole life: death and tornados. But as I’ve gotten older, rather than growing bolder, I’ve found that I’ve actually gotten more afraid of things—some that haven’t even happened to me, might never happen, or are so ludicrously unlikely to ever come to pass that it’s a wonder I’ve even spent more than twenty seconds entertaining the notion of them.

But believe me, I have.

Somehow I convinced myself this was some twisted form of self-preservation. I didn’t even realize how controlled by fear I was until I took a family trip to Colorado. I spent the first two days of our vacation wringing my hands wondering how I was going to make it through an entire week away from the controlled environment of home, where I felt safest.

And then, like a celestial gavel of Looney Tunes proportions whamming me over the head, it hit me: I had become a slave to fear.

Not taking in the sights of the mountains around me, which I was seeing for the first time in my life, I was instead crippled with anxiety over the thought of plunging off the edge. Rather than relishing the thought of wading in mountain rivers and walking through pine forests, I was paralyzed at the notion of catching some rare aquatic parasite or being mauled by wild animals. Sounds kind of ridiculous, doesn’t it? But for me, that fear was very real.

Demoralization on the Battlefield

More crippling than all the ways I was afraid was the stunning realization of just how much of my happiness and usefulness that fear was stealing. I’ll be the first to admit that I let the cares of this life distract me to the point where I was no longer effective in the spiritual battle; I became completely focused on what was happening around me in the physical world, entirely missing the supernatural ramifications of my fear.

And like any war, one of the chief weapons in the enemy’s arsenal is demoralization. Fear has always been the greatest destabilizer of fighting forces. Way back in the time of King Saul, there was a prince named Jonathan who slaughtered twenty Philistines and scared the rest of them so badly that they scattered (1 Sam. 14:6-14). There are records in almost every modern war of opposing sides using fear tactics to whip up the other camp into a frenzy that made them tactically ineffective.

It’s no surprise—given how much the physical world often reflects the spiritual realm—that fear is one of the primary tools in the Devil’s arsenal against God’s troops. That was a hard reality for me to face as the miles blurred by on my road trip, but it really became clear to me through a line in a novel I was reading at the time. When two characters are arguing about how to act on behalf of a captured friend, one accused the other, “You’re so afraid, it’s frozen you like prey in the sight of a predator.” I was struck by that line because that was me. I had to ask myself, “Just how effective can I be when I’m so scared of everything?”

So I started to pray, and continued praying throughout the course of my vacation that God would help me to become fearless again, like I’d been as a child. Not that I was ignorant of danger; my parents raised me to be careful, but grounded in unshakeable faith in the Father. I had once been a girl willing to take risks because of the rewards, and I ached to return to that place. And God, ever faithful, opened my eyes to the ways I could confront my fears. Below are the five tent-poles, if you will, on which I’ve staked my return to the old, brave me—my weapons in my own personal spiritual battle against the things that terrify me. And I hope they will help you, too.

1. Understand that God loves you!

One of the greatest challenges that Christians face—and that stops nonbelievers from coming to a place of salvation—is the fear that God is angry with them. So many broken hearts remain enslaved to shame, unable to be set free because of a deep fear that God hates them. Some of the boldest steps to escaping the bondage of fear can be taken once we truly grasp that God loves us—with all of our flaws, our faults, our shortcomings, even when we are terrified of things. One of my favorite lessons my Mom ever taught me was that “Fear is the antithesis of trust. Trust is faith, and faith is the crux of the Christian walk.” How true is that?! When we lay our trust in God, we’re able to set aside the fear that He is resentful, angry, or disgusted with us. And that helps us to unpack the rest of our fears.

2. Recognize what fear actually is.

The sensation of fear is not prophetic. It isn’t a guarantee of something awful happening to you. Being afraid to talk in front of a crowd doesn’t mean that you’re doomed to stutter. Being afraid of heights won’t shove you over the edge. Fear is a visceral and chemical reaction to a perception of danger or discomfort. While it’s good to have a healthy respect for things such as snakes or spiders that can poison you, or for a shady block of the street where you shouldn’t walk at night, fear doesn’t equip us to face these things. In fact, fear can inhibit our ability to rationally face the things that endanger us. In short, fear cannot save us. Thankfully, while we can’t control the circumstances that bring about fear, we can control fear itself by controlling our minds.

It’s interesting that one of the first signs of sin nature having come to rest in the spirit of Adam was that he was afraid because he was naked, so he hid from God. Before the Fall of Man, Adam and Eve lived fearlessly among the lions and wolves. They spoke with God, unafraid. All of that changed when sin entered into the world; between the pages of Scripture there began a campaign, carried out by God from Abram to Mary, from Hagar to Samuel, to all of Israel, to the disciples of Jesus, and to all of us now: “Do not be afraid,” God said to them. And later, through Christ, “God has not given us a spirit of fearfulness.” Fear hinders us from being effective witnesses and warriors for God; God knows this, and He’s equipped us to face fear through power, love, and ultimately, sound-mindedness.

4. Don’t be impressed by fear.

This was a lesson I learned from a small account written by Dave Meyer, husband of renowned Christian speaker Joyce Meyer. In it, Dave talks about his childhood and adolescent struggles with migraine headaches. He began to dread the first signs of the migraines—blurry vision—because he knew what followed. One day, he heard God clearly tell him, “Don’t be impressed by it.” What a powerful lesson! When we give over to a sense of fear, what we’re really doing is allowing the idea of danger or harm to impress itself upon us. Like a wet, suffocating blanket, it smothers our rationality and occludes our common sense. But when the first tangles of fear start to weave into our minds, we have the choice to say, “I won’t fear this. I won’t let it impress me. I’m going to face this logically and respectfully and look for a grounded solution.”

While facing the things that make us afraid isn’t always simple, facing fear itself is actually a straightforward process. Like a knight squaring up to an enemy army, we have the choice to meet the front lines of our dread, or to flee. But when we choose to flee from fear, we don’t conquer it. We cower from it, and that means the next time it comes back, it will inevitably have “grown” in our minds. On the other hand, when we choose to face fear and remind ourselves that this is a feeling, a thought that can be led captive in obedience to Christ, we have a victory in our pocket that makes us bolder the next time we face it. Through prayer, common sense, and the power and authority of the holy spirit in us, we are already equipped to face—and conquer—what we are terrified of. Even in the spiritual realm!

Hope and Wisdom Over Fear

A friend of mine recently taught me that courage is the antidote to fear; he also said that wisdom helps us to approach the same situations that cause us to be afraid, but with a level head. When we learn to face the things that frighten us with a healthy, godly perspective of wisdom rather than a spirit of fear, we are made bolder and stronger—more courageous. With that courage, we become better equipped to deflect the fiery darts of the enemy, who rules this age and fights the spiritual war with a heavy fist of fear; then we can walk like the Lion of Judah who went before us, facing everything with sound minds and love—full of hope rather than fear.