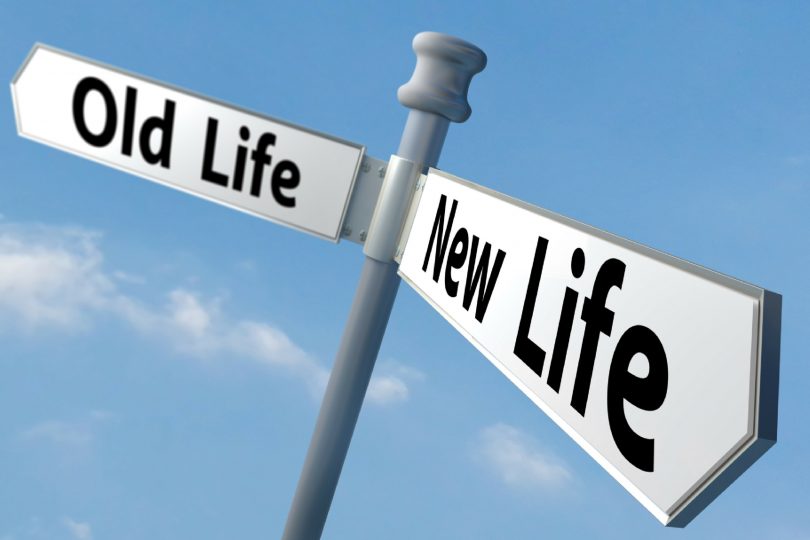 As a fairly new Christian, I sometimes feel as if my past as a non-Christian continues to follow me. When I became a believer and was born again I quickly latched onto learning everything I could about God, Jesus, the holy spirit, or anything that had to do with being a follower of Jesus.  I was very hungry for knowledge and was doing anything I could to learn.

I felt like my life and who I was had changed dramatically. The thing that I quickly found out was that the way people perceived me didn’t change quite as fast. My eyes had been opened to a whole new world, and it was as if I was seeing in color and they were still seeing everything in black and white. I wanted to go back to my friends and family and tell them all of the amazing things that I was learning. But when I tried to talk to them about my new brightly-colored world, many of them brushed me off or rolled their eyes at me. I began to wonder how I could convince people that I had really changed. I really did believe all of these wonderful truths!  I now wanted to obey God and I wanted my family and friends to see me as I now was, a follower of Christ and not the unbeliever I was before.

As the Lord so often does, he answered my questions as I was reading the Bible.

The Example of Saul

The Apostle Paul, also known as Saul before he believed in Jesus, was a man who was also plagued by his past. At one time he was aggressively persecuting Christians, dragging them off to jail and hindering what Jesus and the apostles were trying to accomplish. Acts chapter 7 even describes how he stood by and watched the first martyr, Stephen, be stoned to death for teaching about Christ.

Yikes! Stephen, one of the beloved disciples who was moving the word of God and teaching about Christ, was stoned to death for speaking truths—and Saul stood by and was pleased about it! As the Book of Acts continues, it describes Saul fiercely persecuting the church and early Christians.

Acts 8:3 (NIV)
“But Saul began to destroy the church. Going from house to house, he dragged off both men and women, and put them in prison.”

Acts 9:1-2 (NIV)
“Meanwhile Saul was still breathing out murderous threats against the Lord’s disciples. He went to the high priest and asked him for letters to the synagogues of Damascus, that if he found any there who belonged to the Way, whether men or women, he might take them as prisoners to Jerusalem.”

Thankfully, before I was saved I never tried to kill anyone for believing in Jesus, but I clearly wasn’t doing what Christ wanted me to do, either. I knew enough about God to know that what I was doing wasn’t right, but I also didn’t necessarily understand the consequences of my actions or why I should be obeying God.

As Saul was on his way to Damascus, “…suddenly a light from heaven flashed around him. He fell to the ground and heard a voice say to him, “Saul, Saul, why do you persecute me?” “Who are you, Lord?” Saul asked. “I am Jesus, whom you are persecuting,” he replied. “Now get up and go into the city, and you will be told what you must do.”” Acts 9:3-6 (NIV)

When Saul opened his eyes, he was blind, and the people with him had to lead him by the hand to Damascus. Saul had such a well-known reputation for persecuting Christians that Ananias, the man the Lord told to go and pray for his sight to be restored, was afraid to even approach him. Thankfully Ananias listened and ministered healing to Saul. Saul regained his sight and was baptized immediately. Praise God!

Clearly not everyone’s conversion is quite as dramatic as Saul’s.  I know mine wasn’t. I didn’t see the Lord or go blind for three days, but I did change.  Some of you reading this might not be able to relate to having such a conversion as this, but consider how powerful the results of every conversion really is: when we turn to God and ask forgiveness, He immediately forgives us. He does!

This is a powerful truth that we all need to let sink in.  How far is the east from the west? It can’t be measured. They never meet! When we ask God to forgive us for something, it is completely removed from us as far as the east is from the west.  It cannot be measured against us anymore. That is amazing! God’s grace is so big, it is hard to wrap your head around.

Witnessing in Spite of the Past

One of the things that I struggle with is that some of the people in my life aren’t as quick to forget as God is. Consider a time in your life when you disobeyed God, and people in your life knew about it.  There were times in my past that I made decisions or did things that definitely don’t line up with being a follower of Christ. Part of my struggle is, how can I go back and witness to people who know that I have done those things, and help them turn to the Lord, when they know my past? I don’t want to seem like a hypocrite.

Think of that time you disobeyed God. It may be something small or big. Maybe you lied to a close friend and they found out. Even though they might forgive you, they probably will not forget so quickly.  What’s the best way to deal with this issue? Let’s keep looking at Saul’s life.

Acts 9:19-20 (NIV)
“Saul spent several days with the disciples in Damascus. At once he began to preach in the synagogues that Jesus is the Son of God.”

Only days before, he was dragging anyone who was preaching about Jesus to prison, but now he was one of them, and he was even talking to others about it! Talk about a 180 degree turn around! This guy had major changes in his life, and he was not afraid to go out and preach the good news of Jesus. I admire his courage and bravery, and that’s the first half of my answer. Like Saul, we too need to have boldness and confidence so that no matter what sins we have committed in our lives, we feel the freedom to speak the word of God. Saul was now doing the exact thing he had been killing people for.  He stepped out and proclaimed Jesus! No wonder this caused some confusion for people. They didn’t know what to think of him.

Acts 9:21 (NIV)
“And all who heard him were astonished and asked, ‘Isn’t he the man who raised havoc in Jerusalem among those who call on this name? And hasn’t he come here to take them as prisoners to the chief priests?’”

The Jews were so upset that they even plotted to kill him and when he went to join the disciples, they didn’t know if his conversion was real or not.

Acts 9:26 (NIV)
“…he tried to join the disciples, but they were all afraid of him, not believing that he really was a disciple.”

They were afraid of him, and who wouldn’t be? Just days before he had been persecuting them and trying to drag them off to jail. Saul had to face his past and convince people that he had genuinely changed. He was not who he was before. He was now fighting with them, not against them.

This was the second part of the answer to my question. Saul had to face this obstacle, and the way he did it was he kept preaching and proclaiming the good news of Jesus. He used love and perseverance to prove that he was a changed man. Jesus even told his disciples this firsthand: “Your love for one another will prove to the world that you are my disciples.” John 13:35

That old saying that your actions speak louder than your words is still true today. If you want to prove that you are trustworthy, then keep people’s secrets; if you want to prove you are a good worker, than work hard at what you do; and if you want to prove you are a follower of Christ, than be as loving and Christ-like as you can be. Even when people were afraid or questioning Saul, he stood by what he believed and said, “This is who I am now and this is what I believe.” He showed people he had changed through his actions. If he had not kept pushing through others’ doubts and harsh words, he would not have become the disciple and man of God that we know him as today. Paul received amazing revelation from God, much of which is written in the New Testament. We never know how God is going to use us, but it is our job to keep pushing forward and doing the best we can.

So whether you are a new believer like me, or a long time believer, we all have a past, and many of the things that we’ve done do not reflect the light of God. And it seems sometimes in today’s world that people tend to remember the mistakes that we’ve made rather than the good things we’ve done. When people know and remember our “not so Christians actions,” we have to stand strong in our beliefs, just like Saul did, and keep showing them through our actions and love that we have changed because we are children of God.