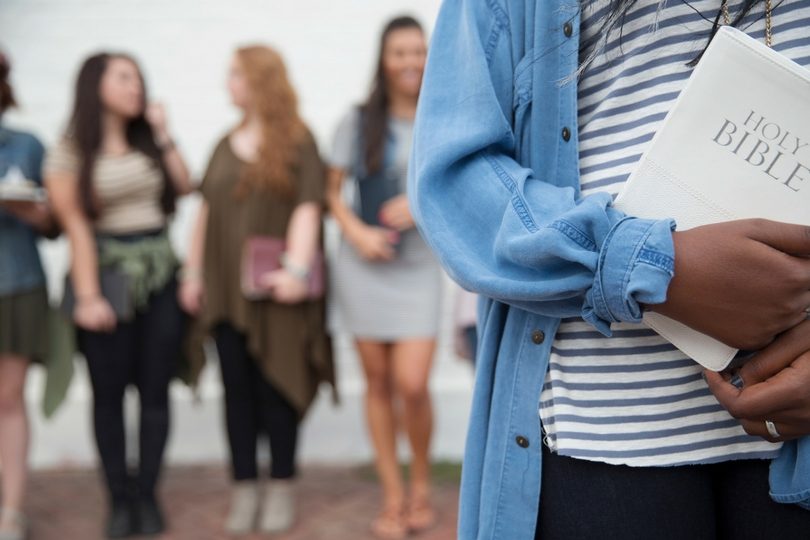 Modesty is one of the most widely-discussed topics in Christianity…probably because no one can come down hard and fast on a sure biblical line where dress code is concerned. Some churches won’t let people show up in less than a shirt and a tie, or a dress; others don’t care if you come in a bikini top and Daisy Dukes, so long as you actually get there. But one thing that’s pretty universally understood—by Christians and non-Christians alike— is that, outside of the confines of the house, where one is free to dress however one wants…apparel standards are changing.

Nowadays, it’s not uncommon to walk around in public and pass a few people in sheer, see-through tops, mid-thigh shirts that leave the presence of pants to be questionable at best, or shorts that struggle to keep up. It’s obvious that the boundary of public dress code is in the midst of another infamous shift. In light of that, many Christians are asking—what happened to modesty? What even is modesty? And what do we do about those who are immodest around us?

I aim to tackle those subjects in this article…perhaps in a different way than they’ve been addressed before. Let’s start with addressing the meaning of “modesty.”

When it comes to the subject of modesty in the Bible, the most common verse cited on the subject is 1 Timothy 2:9, which reads:

1 Timothy 2:9
Likewise, I want women to adorn themselves in respectable apparel, with modesty and good judgment, not with braided hair and gold, or pearls, or costly clothing,

Back in the time of Paul, showing a little ankle was considered shocking; women often covered their heads, even while praying. So. Paul intricately wove the notion of respectable apparel into the subject of flashy, costly goods—exterior adornment that would be the first thing these women were judged on. He was warning them against presenting their image based on their wealth, rather than their character.

Now, don’t get me wrong—a lot of immodest behavior involves people being as scantily clad as possible—which is why the verse mentions women “adorning themselves in respectable apparel.” But let me frame this in light of a personal story from someone I know.

This guy spent a good deal of time working a custodial job at a college, and during that time he had a coworker who he graciously described as one of the most crass and unsettling people he had ever been around. Now, there was no way she was dressing immodestly—she wore the same long pants and collared t-shirt as the rest of the staff. And yet, her entire demeanor and personality—the jokes she made, the way she walked, talked, and acted—oozed with immodesty. It made people uncomfortable, and it had nothing to do with how much skin she was showing.

Stories like these are the reason why I would go so far as to say that true modesty is not a dress code—it’s a heart-stance through which we present ourselves. Thus, modesty is best defined as Merriam-Webster’s dictionary does: “Propriety in dress, speech, or conduct.”

What Happened to Modesty?

When it comes to modesty of conduct, this is an easy question to answer; as the days darken and the world trundles ever onward down the steep slope of moral degradation, conduct overall continues to become more and more immodest. Immoral speech, action, and thought run rampant—and, largely, unhindered. But on a narrower scale, what about modesty in dress? Why has that become such an issue lately?

Well, ultimately, we have to recognize that the standard of modesty is an ever-changing line. Remember, it used to be unacceptable to see a woman’s bare shoulders in public. And anything above the mid-calf? SCANDALOUS! As I write this, in the middle of summer, I thank God profusely that my shorts-and-T-shirt attire are not considered immodest anymore. The line has moved back enough that I don’t have to roast in our Midwest heat waves if I want to leave my house.

But we have to always keep that shifting line in mind. Because while it’s generally understood that you don’t run around in your underpants—or less—and while we have a fairly standard barometer of discomfort when it comes to seeing a guy’s boxers hanging out or a girl’s glutes showing below her way-too-short shorts…nevertheless, these are symptoms. They’re symptoms of a line that’s gradually being erased and moved back, erased and moved back. And it will most likely not stop moving any time soon.

So when it comes to tackling the issue of modesty, it’s less a question of dress and more, I think, an issue of heart.

The Heart Behind the Problem

Speaking from personal experience, people who dress immodestly usually do it for a base reason: insecurity. It’s very often the case that immodest people are insecure and looking to make a statement with how they present themselves—either to show that they don’t care how they’re perceived (they actually do care… a lot) or that they just want to be perceived in general…and fawned over.

A guy running around shirtless is most likely hoping to attract a few female eyes; a girl wearing short shorts and a crop top wants to feel sexy, and she wants someone to comment on it. In the case of my friend’s coworker, she was a girl who’d suffered sexual abuse in her past; not difficult to find some issues of unworthiness and insecurity spawning from that situation.

On the other hand, people who dress and present themselves modestly usually don’t draw their sense of worth from the way they’re perceived. This doesn’t mean they feel the need to run around in floor-length skirts and long sleeves; but a modest person will usually keep the bikinis to the pool, their pants pulled up, and their neckline in a reasonable spot. This outward attire reflects an inward state—it shows that their value is not drawn from their exterior and how much that side of their whole being is worshipped by those around them.

How Do We Address Immodesty?

That’s the real question, isn’t it? As a whole, Christianity tends to bite back hard at people who dress and behave immodestly; but in order to take a Christ-like stance, we need to be able to look past the attire and ask why. Why does this person feel the need to draw attention by how they dress? What are they actually covering up by how much they expose?

Godly love is about healing the hurt, not merely addressing the symptom of it. And in our core, all of us are really looking to be fulfilled; we have a longing built into us to be clothed with imperishable, godly coverings. When that need goes unmet, when that godly desire remains unfulfilled, we tend to turn that ache into something that presents itself immodestly—in a bare-skinned, loud, often-obnoxious plea for someone to hear us.

To use myself an example: when I was about sixteen, I remember one time I visited some ultra-religious relatives for Thanksgiving… dressed in a knee-length skirt, knee-high socks, and a sparkly blue sleeveless shirt.

This was a cry of defiance against people who had told me I was going to hell for unconventional spiritual beliefs. I look back on this now and want to slap my younger self. I thought I was being edgy and awesome, but really I was wearing my heart, my hurt, and my arrogance on my sleeve. What I wanted to be was tough, to show them I didn’t care what they thought of me; but I actually cared a lot. My decidedly non-religious attire was a plea to be noticed; and while my relatives did not seem to notice—or were trying very hard not to—God did. Thankfully, He gave me the slap I so desperately needed, and I was able to halt that downward spiral of rebellion before it extended beyond my relatives’ living room.

But the only way I was able to head off that phase of life was when I began to seek my value internally—through my relationship with God. Until that time—and, honestly, for about a year after, as it was a slow process—everything was about how I was perceived by my peers and associates. It took understanding my value to the Creator who made me in order for me to emerge from that hole. And maybe I’m biased because of that, but I feel like I can’t emphasize enough how important it is that we tell people—including the immodest and immoral—that they are worth it. They are good enough. They have intrinsic value that doesn’t hinge on how many likes their provocative Instagram post gets.

Now, it bears noting that some people don’t even see immodest dress as being immodest, and they’re most likely not going to stop dressing in a way that makes them feel good. We also can’t walk onto a beach or into a club and start yelling at people to put more clothes on. So, what can we do?

Ultimately, we can recognize that as Christians, we don’t change the culture by regulating a line that’s being pushed back year by year; instead, we invoke change by loving people through the hurt that causes the action. When people respect themselves, their actions reflect that. When someone cherishes their body and their entire self, the need to protect what is sacred—even on their physical person—comes naturally from that. And when their risqué, immodest actions are reflecting a hurt, a deep need, a soul-ache that the world appears to soothe but not heal with its lustful eyes and vain attention, we have to remember that God offers something deeper.

On a case-by-case basis, we can reach immodest hearts and the exposed bodies that hold them by offering them something better than ridicule, lectures, and judgement targeted at how much skin they’re showing; we can offer them a listening ear, a genuine care for why they’re behaving the way that they are. And then we can offer them the Savior’s cloak—that covers all skin, all sin, and all suffering—so that they can find shelter under Christ’s wings.

And that, my friends, is where the healing—and the change to the road of true, heart-and-body, biblical modesty—begins.