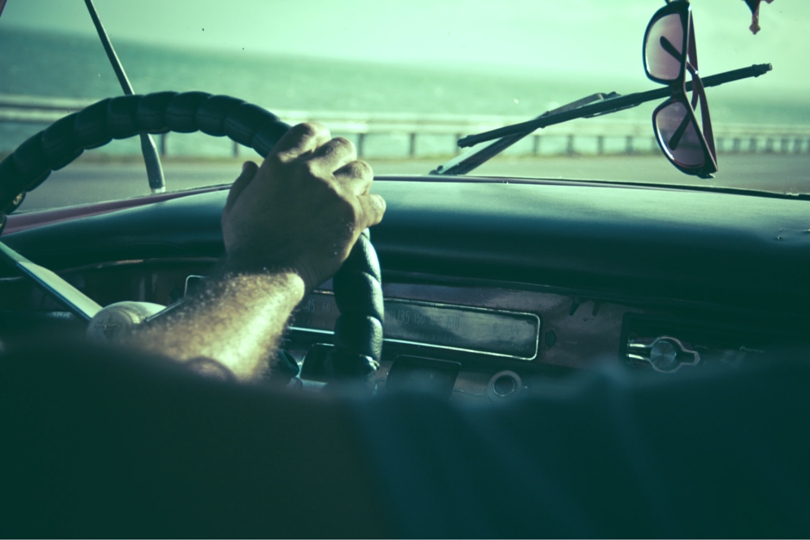 Living in the beautiful state of Maine, I am fortunate enough to see lots of wildlife in my everyday experiences. It is such a treasure to encounter animals in their natural habitats, and I have always enjoyed animal-watching. The most iconic Maine animal is the moose. These big, beautiful animals have a reputation in our state, and people come from all over to see them. The unfortunate thing about having an abundance of these God-created creatures is that they can be a danger to humans, especially while driving—and particularly at night.

Recently I found myself driving home in the dark by myself. I had an hour’s drive and there was a stretch of road, about 25 miles long, which was very curvy and narrow with only a few houses; and I knew moose were likely to be there. As I started my drive, I took it slowly and kept my eyes peeled for anything in the road or along the edges. Hitting a moose would seriously damage my car and could even kill me, and I have driven enough to know that they can appear out of nowhere; to make matters worse, a lot of times they are so stunned by headlights that they just stand there and don’t move. I continued my journey going about 45 mph in a 50 mph zone, and thankfully hadn’t seen any animals yet. After about 20 miles, I looked down and noticed I was going over 60 mph! How had that happened? I was paying attention and being so careful, and then… I wasn’t. I had zoned out. I had started listening to the radio and my mind had drifted off. As soon as I realized how fast I was going, I quickly slowed down and continued my journey.

But it got me thinking… how often does this happen to us in our journey of life? We start out with the best intentions and have goals in mind, but after a little while we get comfortable and zone out; this is where we can get ourselves into trouble physically, mentally, and spiritually.

King David & The Promises of God

Let’s take a look at one of our forefathers, King David. We first come to know David when he is a young shepherd boy, and we eventually learn that he was a man after God’s own heart. God chose David out of all the men of Israel to be the next king, and he began his rule as a warrior trying to bring things back together after Saul’s death. He conquered Jerusalem, brought peace to the land, and returned the Ark of the Covenant to Jerusalem. David was a strong leader, a noble king, and a prayer warrior for God. He wrote hundreds of Psalms that are so wonderfully phrased that they resonate in our hearts even today. David had a lot going for him. In 2 Samuel 7 we see a lot of things that God did for David and things that He promised to do in the future:

2 Samuel 7:8-9, 11-12, 16
(8) I took you from the pasture and from following the flock to be ruler over my people Israel.
(9) I have been with you wherever you have gone, and I have cut off all your enemies from before you. Now I will make your name great, like the names of the greatest men of the earth…
(11) The LORD declares to you that the LORD himself will establish a house for you.
(12) When your days are over and you rest with your fathers, I will raise up your offspring to succeed you, who will come from your own body…
(16) Your house and your kingdom will endure forever before me; your throne will be established forever.

David had a promise from God that his kingdom would endure forever! This was the first time that the Messiah was prophesied to come through the line of David specifically—and now it was in writing. David knew how important this was, and his response to it was so beautifully humble:

David was so thankful for the blessings that had been brought into his life, and he knew that God was the one who had made them happen. He wanted to be a servant of God. But it is often in a circumstance like this that our adversary wants to ensnare us. When things are going well and we have had so many victories in the Lord, the Devil says, “Oh no – not if I can do anything about it!” Our enemy is the thief who “does not come except to steal, kill, and destroy” (John 10:10).

Just like me driving on the road and wanting to get to my destination, and just like David receiving his promises from God, we are often so lulled into a false sense of security by the “smooth road” that we are on that we forget to “Be clearheaded! Be watchful!” even though our “opponent at law, the Slanderer, walks around like a roaring lion, seeking someone to devour” (1 Pet. 5:8).  The Devil doesn’t take a break, he doesn’t sit on the sidelines; he is actively seeking out those who are “zoned out” and he searches for opportunities to strike.

Not long after God revealed His promise to David that his kingdom would endure forever, David got himself into trouble. He set his cruise control and forgot the dangers that were lurking on the sides of the road. Dangers can come in all sorts of forms; money, pride, illness, fear, or in David’s case, lust.

2 Samuel 11:2-3
(2) One evening David got up from his bed and walked around the roof of the palace. From the roof he saw a woman bathing. The woman was very beautiful,
(3) and David sent someone to find out about her. The man said, “Isn’t this Bathsheba, the daughter of Elam and the wife of Uriah?

This should have been the end of the story. David found out that she was married, and he should have left it at that. He knew it was wrong to sleep with another man’s wife, but he did it anyway. The Devil had perfectly placed this snare in David’s path, and instead of seeing it and stepping to the side, David walked right into it and got himself into quite a mess.

We don’t know what David was thinking at the time, or why he did what he did, but we do know that he was human. God’s original intention was for humankind to be perfect, but when Adam and Eve disobeyed, sin entered the world. As humans, we are not perfect and we don’t always see the snares and traps the Devil sets up for us, but as God’s children we can rely on God to help us avoid them. It is easy to get so busy and distracted in life that we forget to go to God and ask Him what He thinks about the path we are on. We could avoid some of the messes that we get ourselves into if we just stay more alert and aware of what is going on around us, both physically and spiritually. Oftentimes I ask God for “spiritual eyes,” because living in this world we don’t always see the spiritual battle going on behind the scenes.

1 Corinthians 2:10, 12
(10) “But God has revealed them to us through the spirit, for the spirit searches all things, even the deep things of God…
(12) Now we received, not the spirit of the world, but the spirit that is from God, so that we can know the things that were freely given to us by God.”

As children of God, we are so fortunate to have the spirit of God within us. We can freely communicate with God our Father, and He can help us to see the bumps and sharp turns that lie in the road ahead. Learning how to stay alert and “zoned in” on God and spiritual things isn’t an easy task. It’s going to take time and commitment. It is a life-long choice and mission that honestly we won’t be able to learn ON OUR OWN. Thankfully, we don’t need to!

Romans 8:9-10
(9) “But you are not in the flesh but in the spirit…
(10) But, if Christ is in you, although the body is dead because of sin, the spirit is life because of righteousness.”

In Step With God

As born-again Christians, we are not in the flesh anymore—we have the spirit of God within us! We do not have to try to win the battle alone, because God is with us. Yes, we still live in the flesh and are still surrounded by others living in the flesh, but we have an advantage:

Galatians 5:24-25
(24) “Those who are of Christ Jesus have crucified the flesh with its passions and desires.
(25) Since we live by spirit, let us also keep in step with the spirit.”

Keeping in step with the spirit means keeping in step with what God wants us to do. We have to learn to ask God what is going on spiritually in every situation and what His will is. We have free will to go down whatever path we want in life, but if we want to be pleasing to God, we will go to Him first and ask what decision He would have us make in many situations.

Ephesians 5:15-20
(15) Therefore, watch carefully how you walk, not as unwise, but as wise,
(16) making the best use of the time, because the days are evil.
(17) Because of this, do not be senseless, but understand what the will of the Lord is.
(18) And do not get drunk on wine, which leads to reckless actions, but be filled with spirit;
(19) speaking to one another in psalms and hymns and spiritual songs, singing and making music in your heart to the Lord;
(20) always giving thanks for all things to God, even the Father, in the name of our Lord Jesus Christ.

In other words, Paul was telling us to pay attention to what we are doing and make sure that it is aligning with what God wants for us.  This is something that we have to train ourselves to do every day. It is a difficult task, but it is worth it if we want to grow in the Lord and be His righteous servants.

Even when David sinned with Bathsheba and was confronted by the Prophet Nathan, he repented and made himself right before God. Many of us know and relate to his outcry to God in Psalm 51:10: “Create in me a clean heart, O God. Renew a right spirit within me.” We know that we are not perfect and never will be in this life. We are going to mess up and zone out. It is so easy to do that with all of the distractions of this world, but we have to be diligent in training our minds to focus on God and keep watch for the spiritual things of this world.