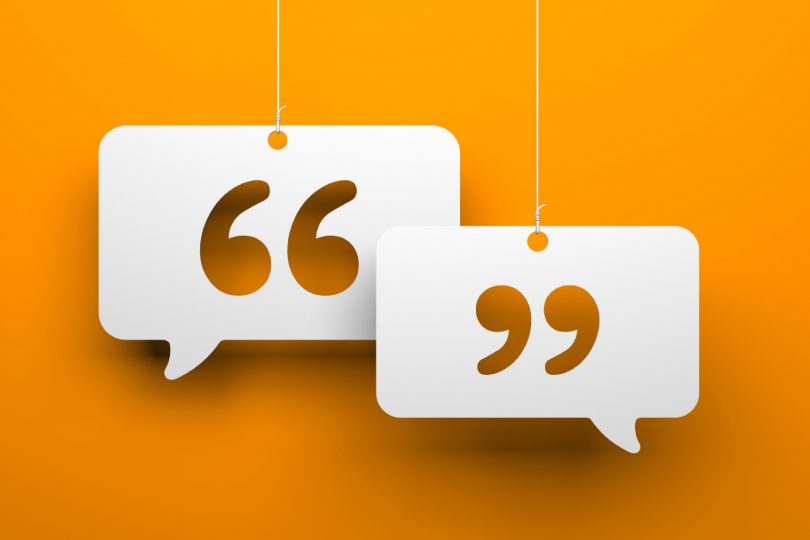 When I was a kid I remember hearing a saying that dates back to 19th century England. It’s been phrased several different ways, but the one I recall went like this: “Sticks and stones can break my bones but words will never hurt me”. Basically it was meant to remind us that we can’t control other people’s tongues and that we should just let false and unkind words roll off our backs. But deep down, this little “proverb” never did seem accurate—and besides that, it never brought me any real comfort. Today I can handle the words of others much more easily than I did as a kid, but I still don’t like being belittled, insulted, lied to or lied about. Words can and do influence and affect our minds and hearts on a long-term basis, especially when we’re young. That’s why, personally, I cringe whenever I hear an adult berate a child.

Throughout most of history, words were basically spoken face to face or written down on papyrus, parchment, and paper. Now however, they’re also delivered through various methods such as radio and TV, texting, voicemail, Facebook, YouTube, blogs, and so forth.  Words communicate and represent ideas and concepts and they not only have meaning, but also power. They can inform and they can mislead. They can instruct and they can lead astray. They can hurt and they can heal.

The Beginning of Words

Using words to communicate was God’s idea. Read the first chapter of Genesis and you’ll see the phrase “God said” ten times. Then two chapters later, not long after Adam and Eve were created and living in Paradise, they entered into the spiritual battle. It was a battle they weren’t looking for, and in fact it’s a battle they didn’t even start. It was a battle of obedience expressed and fought through words. God said “you will die, yes, die” (Gen 2:17) and the serpent said “No, you will not die” (Gen 3:4).

The “spiritual war” started when the serpent (Lucifer) rebelled against God (Yahweh). Then the first “spiritual battle” involving humans started in the Garden of Eden when the serpent, a.k.a. Satan, deceived Eve using words—with Adam joining her shortly thereafter in the deception. This resulted in sin, which ultimately resulted in death. And it’s been battle after battle ever since.

Any conflict, argument or fight you’ve ever been in started with words because every expression of ideas and all actions start with words, either spoken, written, or thought. This includes every kind of fighting, whether it’s mental, emotional, physical or spiritual.

We fight the spiritual battle by being spiritual beings and living spiritually. That starts with being born again of God’s spirit and then developing a spiritual relationship with God and the Lord Jesus. If this sounds a bit esoteric, let’s simplify it. To build our relationship with the Creator and the Savior, we should pray, using “words”. 1 Corinthians 14:15  instructs us to speak in tongues, i.e. pray in the spirit using words we don’t know and don’t understand, and to pray with our understanding, using words we do know and do understand. Along with these two methods of prayer, as we fight the spiritual battle we should listen for helpful “words” of wisdom and “words” of knowledge from God and the Lord Jesus (1 Cor. 12:8). We should also build our relationships with other believers using “words” of comfort and encouragement.

Hebrews 10:24-25 (REV)
(24) And let us consider one another, to spur one another on to love and good works,
(25) not abandoning our meeting together, as some are in the habit of doing, but exhorting one another, and all the more as you see the Day drawing near.

1. Jeremiah, one of the few true prophets of his time, told the people in Jeremiah 23:16 that they would be in exile for 70 years, while the other prophets said the exile would end much sooner.

2. When Jesus was tempted by the slanderer (the Devil), it was through an exchange of “words” recorded in Matthew 4:1-10. This spiritual battle went round after round starting with what the Devil said, and ending with what Jesus said. Thankfully Jesus is the living word of God and he will have the final word.

3. At his so-called trial, Jesus was declared guilty and he was sentenced to death by the chief priests and the Sanhedrin. All this happened through the testimony of false witnesses, who all used “words”.

Matthew 26:59-66 (REV)
(59) Now the chief priests and the whole Sanhedrin were seeking false testimony against Jesus so that they could put him to death,
(60) and yet they did not find it, although many false witnesses came. But finally, two false witnesses, having come forward,
(61) said, “This one said, ‘I am able to destroy the sanctuary of God, and to build it in three days.”
(62) And the high priest stood up and said to him, “Are you not going to answer? What is it that these men testify against you?”(63) But Jesus remained silent. And the high priest said to him, “I charge you under oath by the living God, that you tell us if you are the Christ, the Son of God.”
(64) Jesus said to him, “Yes, it is as you say. Moreover, I say to you all, in the future you will see the Son of Man sitting at the right hand of Power, and coming on the clouds of heaven.”
(65) Then the high priest tore his garments, saying, “Defaming talk! What further need do we have of witnesses? See!, now you have heard the defamation.
(66) What do you think?” They answered and said, “He is deserving of death.”

4. Even God used words to minimize society’s evils when He confused languages at the tower of Babel in Genesis 11:7

In reality, words are the ammunition on both sides of the spiritual battle. The other army, made up of Satan’s soldiers, utilizes words too. Lies and curses via words are their battle cry against God and His people. So what’s the difference between these two armies? It’s the authority and power that lies behind the one delivering the words and message, i.e. “the name of Yahweh” and “the name of Jesus Christ”.

Don’t Fight Empty-Handed or With a Muted Mouth

Almost every key to fighting in the spiritual arena is mentioned in this small section of Ephesians:

Ephesians 6:11-18 REV
(11) Put on the whole armor of God so that you will be able to stand against the schemes of the Slanderer.
(12) For we do not wrestle against flesh and blood, but against the rulers, against the authorities, against the world-rulers of this present darkness, against the spiritual forces of evil in the heavenly places.
(13) Because of this take up the whole armor of God so that you will be able to withstand in the evil day, and, having done all, to stand.
(14) Stand therefore, having fastened the belt of truth around your waist, and having put on the breastplate of righteousness,
(15)  and having shod your feet with the preparation of the Good News of peace.
(16) In addition to all this, taking up the shield of trust, with which you will be able to quench all the flaming arrows of the Wicked One.
(17) And take the helmet of salvation, and the sword of the Spirit, which is the word of God.
(18) Be praying at all times in the spirit with all kinds of prayer and supplication. And to that end, keep watching with all perseverance and supplication for all the holy ones.

Hebrews 4:12 (REV)
For the word of God is living, and active, and sharper than any two-edged sword, even piercing as far as the dividing of soul and spirit, of both joints and marrow, and is able to judge the considerations and intentions of the heart.

By the way, the Word of God—the sword of the spirit—is the only offensive weapon listed in the whole armor of God. And those opposing us in battle DO find it offensive. So let’s not only carry the “word” of God in our hearts and minds, let’s be offensive and use it when we pray, when we minister, and whenever we speak. Make no mistake about it: as citizens of heaven, we do a have a permit to carry and use this sWORD, knowing that fighting in spiritual battles is part of our calling, our duty, and our honor.